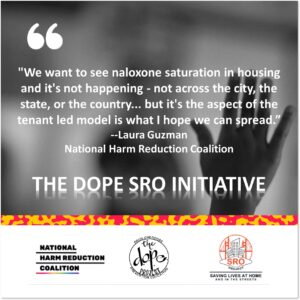 The DOPE SRO Project launched in San Francisco, California during the height of the COVID pandemic. DOPE, an acronym for Drug Overdose Prevention & Education, was created in December 2001 for the purpose of providing overdose education to participants in shelters, jails, treatment programs, and syringe access programs.  The DOPE Project is the oldest of its kind in the country. By 2003, the grassroots organization was coordinating the distribution of naloxone to service providers in San Francisco.  The DOPE Project became a program of the Harm Reduction Coalition in June 2005.

The DOPE SRO (single-resident occupancy) initiative was created in 2020 and expanded in 2021 to address the rising number of opioid-related overdoses by people who use drugs while using alone in their home.

In a brief published by Brandeis Opioid Resource Connector, DOPE was heralded as a national model, “Currently, the DOPE Project is the largest single-city naloxone distribution program in the country, responsible for training over 13,000 people in San Francisco. People who use drugs, their loved ones, and surrounding community members are responsible for reversing on average 1,500 overdoses a year with DOPE Project naloxone.”  The impact of the DOPE Project has increased since the brief was published.  For 2021, the project dispensed 33,495 naloxone kits and reversed 9,492 overdose deaths.

A study released in 2021 revealed the U.S. recorded over 100,000 opioid overdose deaths, 1,361 of which were in San Francisco.  According to their publications, the DOPE SRO Project team–led by Laura Guzman, Senior Director of Capacity Building & Mobilization; Brenda Cantero, SRO Project Manager; and Porcha Dixson, SRO Project Coordinator–described the need for addressing opioid overdose in single-resident occupancy and the partnership they formed with the local health department to help save lives:

“In San Francisco, many overdoses were occurring in private residences due to the decreased likelihood that a bystander or other individual would respond in the event of an overdose. Combined with COVID-19 and shelter-in-place initiatives, formerly unhoused individuals were moved into hotels and supportive housing where this risk of overdose doubled. The risk of overdose for Black men was six times higher compared to their white counterparts.

To be responsive to this trend, the DOPE Project collaborated with San Francisco Department of Health to design and implement the DOPE SRO Project. Particularly during COVID-19, the program’s original design demanded more responsive strategies to keep everyone safe. The team worked together to support the implementation of the project, responding to emergent needs from both the SRO site staff and peer responders. Collaboration with the health department was critical to engage in a coordinated, multi-pronged effort to plan, implement, and evaluate the efficacy of the initiative.”

A study found that between 2010 and 2018 residents of SROs were 19 times more likely to die from an accidental overdose death than the general San Francisco population and were more likely to die at home (86% of SRO residents died at home compared to 64% of non-SRO residents). To be responsive to this trend, the DOPE Project collaborated with San Francisco Department of Health to design and implement an overdose prevention training program specifically designed for permanent supportive housing sites.

The SRO Project is a proven model which is saving lives in San Francisco.  Dr. Kelly Ray Knight released a report which evaluated the effectiveness of the SRO Project in March 2022.  The report contained the following outcomes:

Dr. Knight is the Professor and Vice-Chair, Department of Humanities and Social Sciences School of Medicine at University of California in San Francisco.  The full evaluation report can be viewed here.

As we mourn, we uplift the LGBTQIA+ community – harm reduction trailblazers

A Message From Our New Executive Director: Dr. Orisha Bowers

This website uses cookies to improve your experience while you navigate through the website. Out of these cookies, the cookies that are categorized as necessary are stored on your browser as they are essential for the working of basic functionalities of the website. We also use third-party cookies that help us analyze and understand how you use this website. These cookies will be stored in your browser only with your consent. You also have the option to opt-out of these cookies. But opting out of some of these cookies may have an effect on your browsing experience.
Necessary Always Enabled
Necessary cookies are absolutely essential for the website to function properly. This category only includes cookies that ensures basic functionalities and security features of the website. These cookies do not store any personal information.
Non Necessary
Any cookies that may not be particularly necessary for the website to function and is used specifically to collect user personal data via analytics, ads, other embedded contents are termed as non-necessary cookies. It is mandatory to procure user consent prior to running these cookies on your website.
Save & Accept