Years into recovery, I never forgot the kindness of Haven Wheelock.  My family had forced me into treatment twice, only for me to relapse and OD.  I walked into the syringe exchange scared and alone. I’d had a Hep C exposure.

She didn’t say, “but don’t you want to go to treatment?!” I’d been down that road and learned I was a hopeless case. (What forced treatment + 12-step does to us.)  I would’ve spun on my heels. I knew then that I was a junkie piece of shit who would die in my addiction. It’s ok.  Except, for *once* someone who knew my whole truth—I am injection drug user—didn’t reflect that idea back at me.

There was just kindness and genuine compassion. For me, at my worst.  It was a jarring experience. Every other signal from society was “you’re worthless garbage.”

But Haven just said, “How are you? What do you need?”

“Who are these crazy people that are nice to us junkies?” I would ask my friend later.  Harm reduction is not at odds with treatment. But it is the one, single space where I could just *be.”  Where I wasn’t being bombarded with signals about how bad I was, how I needed to change. As if I didn’t already know. As if I hadn’t already tried. 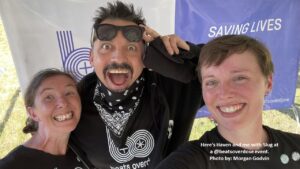 Haven told me I was Hep C negative. From then on, I accessed syringe exchange services instead of buying cleans from pharmacies only when I could afford it. Because I’d found, finally, one single safe space in all the world.  A refuge.

Harm reduction service providers make up a tiny fraction of someone’s daily interactions. They get those brief moments of refuge.  Then they go back to the dirty looks, family shunning, police harassment, and misery.

Harm reductionists were kind to me when no one else was, least of whom myself. There was no prodding or coercion, only compassion.  The world is cruel enough, believe me. Addiction is cruel enough, I assure you.

Who are these crazy people that are kind to people who use drugs? People who get it. Whether because they have lived it or otherwise seen it up close, they know that those moments of refuge are the only thing holding back the total descent into darkness and despair.

I called myself a junkie during my use. As is the point of a pejorative, it’s a label hurled against me that I then internalized, reclaimed. It swelled until it enveloped my whole being. It was the one facet of my identity I did “correctly.” Don’t try to sanitize my experience.

Then Haven became the chief petitioner for drug decrim, which passed. Now, I serve on the Oversight and Accountability Council implementing the services component. I sat in the audience during her presentation at #HarmRed22, never forgetting that day at the syringe exchange. 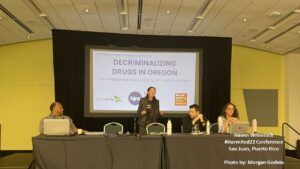 I never did get Hep C! Because I lived in Portland and could access syringes relatively easily. Do you know what I couldn’t access? Medications for OUD! Despite going to treatment and detox repeatedly, not once was I ever offered buprenorphine maintenance . . . until years later.

I spent five years addicted to heroin and four years incarcerated as a direct result of my addiction. I lost my mom and four close friends to overdose. I found a system of injustice within the US justice system. Now, I work to change the systems that harmed us. I strive for safer, healthier communities.  Learn more about her work

As we mourn, we uplift the LGBTQIA+ community – harm reduction trailblazers

A Message From Our New Executive Director: Dr. Orisha Bowers

This website uses cookies to improve your experience while you navigate through the website. Out of these cookies, the cookies that are categorized as necessary are stored on your browser as they are essential for the working of basic functionalities of the website. We also use third-party cookies that help us analyze and understand how you use this website. These cookies will be stored in your browser only with your consent. You also have the option to opt-out of these cookies. But opting out of some of these cookies may have an effect on your browsing experience.
Necessary Always Enabled
Necessary cookies are absolutely essential for the website to function properly. This category only includes cookies that ensures basic functionalities and security features of the website. These cookies do not store any personal information.
Non Necessary
Any cookies that may not be particularly necessary for the website to function and is used specifically to collect user personal data via analytics, ads, other embedded contents are termed as non-necessary cookies. It is mandatory to procure user consent prior to running these cookies on your website.
Save & Accept